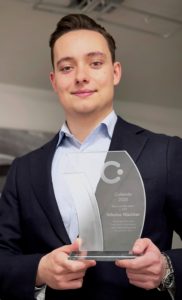 Nikolas Nüchter started working at Collenda as an apprentice and completed a business administration degree working full-time. Now the 23-year-old information technology specialist has been named Most Valuable Player (MVP) for his outstanding work as a consultant.

This year, the celebrations had to take place digitally. Cheering colleagues on a monitor. The award, a statue made of acrylic, is presented virtually. Corona, of course. Nikolas Nüchter (23), now a presales consultant at Collenda, was nevertheless thrilled to receive the Most Valuable Player (MVP) 2020 award. “I must have convinced some customers of the quality of our products during my demonstrations,” he says. As a consultant in the Professional Services division, he has helped Collenda customers implement our software products over the past few years.

A total of eleven employees were nominated for having contributed to Collenda’s success over the past year. “Colleagues who voted could give different reasons and rate different categories,” says Daniel Andres, initiator of the award ceremony. Nikolas received the most votes; the same award for the dutch division of Collenda went to Marianne Booij.

Nikolas Nüchter has now taken the next step in his career. As a presales consultant in the “Corporates” area, he now explains to prospective corporate customers the functionalities of the Credit Management and Debt Management software modules of Collenda’s Open Credit 4.0 software suite. Nikolas also knows how to connect these modules to existing ERP systems. “The application is complex,” he explains. Although the basics could be learned within a short time, users can individualize the software suite down to the smallest detail.

That the Duisburg native knows Collenda’s software products very well becomes clear to anyone who follows one of Nikolas’ customer demonstrations. He explains workflows and automation functions in a calm and structured manner.

It’s no coincidence that Nikolas was hired by Collenda. As a Duisburg native who graduated from Düsseldorf’s Suitbertus High School and now lives in Ratingen-Lintorf, his life has always been in the wider vicinity of Collenda’s German headquarters in Meerbusch. He first made contact with Collenda in 2015 at the Stuzubi careers fair. “I applied to ABIT, which was Collenda’s name at the time, a short time later,” says Nikolas. As part of his training as an information technology specialist, the now 23-year-old has passed through numerous stations within the company. “That was great, of course, for establishing appropriate networks and acquiring the necessary know-how,” explains Nikolas. During this time, he learns the secrets of success from his experienced colleagues.

Not long after he starts his training, Nikolas realizes, “I want to learn more.” In 2016, the 23-year-old begins studying at the University of Applied Sciences for Economics and Management (FOM) in Duisburg and Düsseldorf. There, he says, he was able to major in “Entrepreneurship”. In his bachelor’s thesis, Nikolas is investigating whether the introduction of SCRUM makes sense for individuals acting rationally. “Very theoretical,” he laughs. But he has been able to close a research gap as a result, he says. Collenda has covered part of the tuition, he says.

His first assignment alone is a consulting project for a energy supplier with more than 1,000 employees. “During that time, of course, we were on-site with our customers more often,” he explains. Today, a lot is done remotely. Nikolas has long since adapted to the changed working conditions in the days of Corona. He says that travel time has decreased as a result, but there are now more video conferences.

Privately, he says, he also likes to look at technical books, adding with a laugh: “That sounds so nerdy right now.” With all the work he does in the home office, Nikolas also seeks balance in exercise. He likes to improve his health. The gyms are closed at the moment, he says. So he sets up the weight bench in his bedroom.